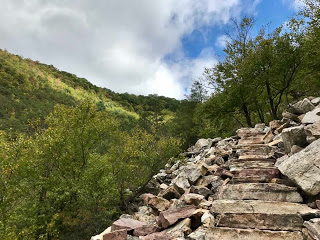 We heard Thousand Steps on Jacks Mountain in Pennsylvania was a good hike. It was long and arduous, but the view would be worth it. Six kids. Four adults. Two backpacks. The trail began with seemingly easy steps, but quickly turned into steep and narrow steps cut from large rock. With popping knees, tired legs and fear of heights prevailing, we made it a third of the way before needing to turn back.

As we began the task of getting the smaller kids down the steep steps, I made sure to point out the danger of stepping on the soil rather than the stone steps. It seemed obvious to the adults, but the kids obeyed despite feeling bothered that I gave them pointers on how to get down safer. Every few yards they needed reminders.

“Stay near the middle of the step, the edge is a bit more dangerous if you were to tumble.”

“Try to make your shoe land on the rock step, not the loose gravel and soil.”

“The drop to the next step is really long, this is a good one for you to sit down and scoot off rather than try to step down.”

“Yes, we can have a snack at the flat part in a few minutes.”

“I know we are tired, but let’s keep going so we can have lunch back at the house.”

My mind kept moving back to my young days in Sunday school when we learned about how Jesus taught it was safer to build our houses on the rock rather than the sand. In those moments on the hike, I realized I had always imagined that scene as the wise builder choosing to build back a bit farther from the shore than the unwise beach builder. I also thought sinking sand was going to be a lot larger of a problem for my life than it turns out. It hadn’t occurred to me that the same principle applied to those building on- or climbing back down- a mountain.

The dry soil and loose pebbles sitting atop the large staircase stones had once been part of a rock. Only, due to time, weather, wearing down by decades of hikers and previous feet of all kinds, it was no longer part of the sturdy rock anymore. It had loosened and become dangerous. It had the appearance of being safe, after all, it looked just like the stones on which it sat. However, it was the very spot we were advised to not bet on sure footing.

Most of us aren’t hiking this particular path daily. Nor are we planning on building homes on mountains or beaches on a daily basis. But we do place our security in things that give the appearance of safety sometimes. We trust ourselves. We trust our education. We trust our governmental leaders. We trust in the familiar or the notion that “I got away with it before, why not keep at it?” Or, we might think the rules simply don’t apply to me.