- April 01, 2015
My awesome father in law gave me a pressure canner for Christmas. Wait… before you roll your eyes and jump to the Betty Crocker comments, you have to hear me out. Cooking with a pressure canner is great because it keeps so much of the nutrients in the food, forces moisture to remain in the foods and is fast (relative to oven cooking times- not in comparison to nuking the food). I was excited to get the pressure cooker for Christmas, but other than canning small batches in it, I wasn't too familiar with how to use it. I found some great ideas on pinterest but most of them came with such strong warnings of explosions, ruining the cooker, third degree burns and other science-lab type accidents, which caused me to just sit back and not use this thing for it's full purposes. But then I was sent the mother-load of all pressure cooker side-kicks. 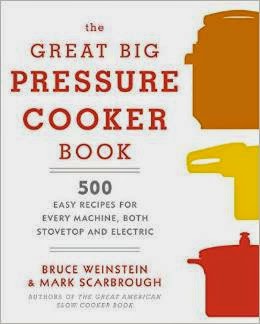 I flipped through and was so shocked to see the variety of things that could be made in my kickin', nutrient-retaining, kitchen gadget. Want some french toast casserole for breakfast? It's in there. How about some cheesecake to finish off your lunch? Yep, you can do that too. Pineapple upside down cake for afternoon snack with your coffee? Totally. Well, not the coffee, but the cake. Soups galore. And meatloaf. Chickens, lamb, cuts of meat I'd never heard of, desserts, and 475+ other recipes.

I do have to say that I was still a bit timid to use my cooker, but a few of my worries were calmed when I read the beginning of the cookbook. The authors hit a handful of personalities (I am the Nervous Nellie) and helped me to see that this tool is safe when used properly and can be a lot of fun. I also had my hunter-husband cheering from the sidelines when he saw the lamb recipes…. because as some of you may already know, lamb has many similar qualities to venison and can be substituted for it easily. He can't wait to get his buck this fall and try out the lamb [read venison] recipes we now have at our fingertips.

So, the great thing I liked about this cookbook is the layout for each recipe. At the onset, the authors give the reader a quick heads up about the cooking time and the trickiness level of the recipe. I appreciate knowing that I am about to attempt a toughie when it comes to balancing my cheesecake on a sling and lowering it down into my cooker. It worked too, wanna see? Here is my 7 inch cheesecake that I baked in my pressure cooker + it's little sling to lower and lift it out. (Instructions are provided in the book on how to make and use the sling. ) 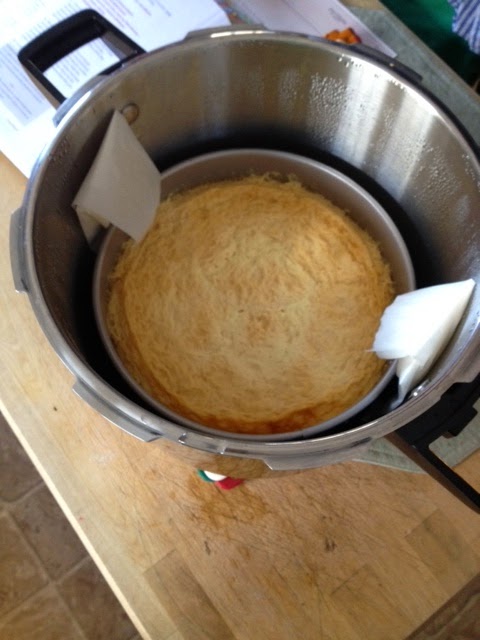 I can foresee the market for pressure cookers rise in the upcoming years, we wise cooks are returning to older cooking methods in order to preserve the best parts of our foods. I have a few friends that don't use their microwaves anymore and this method of cooking precedes the nuking method-so, I think it would be a great addition to their kitchen. As the word spreads of how simple, fast and effective pressure cooking is, I bet this book will come in handy for many people.

As for the meatloaf I made, it was good- not the best I've made- but not the worse either. I think that the problem was the type of ground beef I was using. The recipe called for a very lean cut (leaner meat works better because the pressure cooker forces moisture into the fibers, thus making them soft) and I used what I had on hand. Mine came out a bit mushy, but the flavor was decent. I'm going to try again with the right meat next time.

I was a little disappointed to see that a portion of the recipes were actually variations of the same recipe. The meatloaf was listed a few times with only a slight variation, and the same goes for the puddings and chicken meals. I do have to say though, that even if 25% of the recipes are variations of something else, you are still left with a HUGE amount of ideas on using your cooker. I consider this cookbook something to keep on the shelf.

The publisher sent me a free copy of the book to review, but my opinions are my own. Trust me. The cheesecake is worth it.