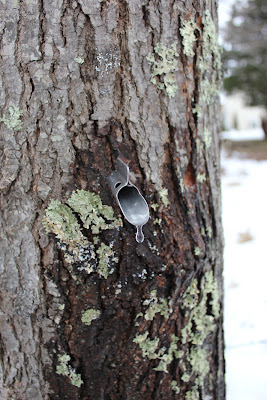 Post disclaimer: Please excuse the overly detailed blogpost. I am writing it for two reasons; first, so that I can remember all the fun facts I have learned over the last few weeks and secondly, so that someone else might learn a few things.

Being new to the New England culture and a homeowner with massive maple trees in our yard, I somehow decided that I wanted to try my hand at making maple syrup.

So, with a Christmas gift from Gil’s aunt, I purchased 4 taps and a few books on the process. Here is a quick summary of what I learned:

-the process of getting sap from maple trees and turning it into maple syrup or sugar is called sugaring.
-the Native Americans were doing this and taught the early immigrants about maple sugaring.
-for every 1 gallon of sap a tree yields, there is another 1000 gallons of sap running through it’s fibers.
-the term for the maple sap moving throughout the fibers of the tree is called “running”
-the sugaring season last for 4-6 weeks a year, beginning when temperatures rises to about 40 degrees during the day and drops below freezing at night. The sap stops running when the variation in temps lessens.
-there are 4 types of maple trees, sugar maples yield the sweetest syrup.
-maple sap is a clear liquid that has a slightly sweet taste
-40 gallons of sap is required to make 1 gallon of syrup, which can be sold for about $65.00/gal.
-depending on the size of the tree, it can be tapped up to 3 times without harming the tree.

Ready for a few pictures? Glad you asked! 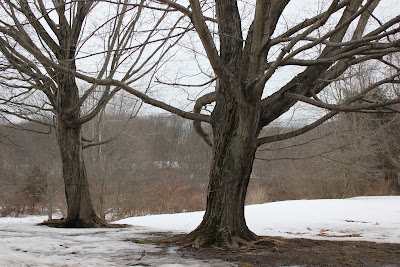 Two of our sugar maples. They look dead and frozen. But magical, sweet things are happening in there! 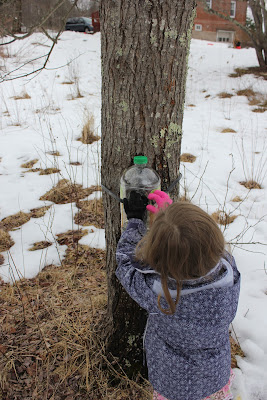 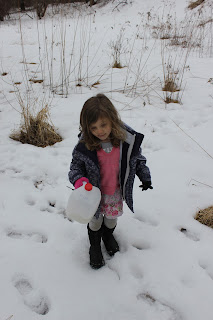 Gathering sap in the snow. 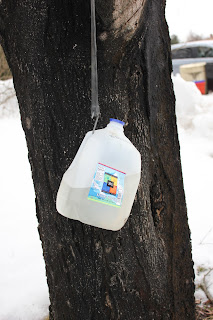 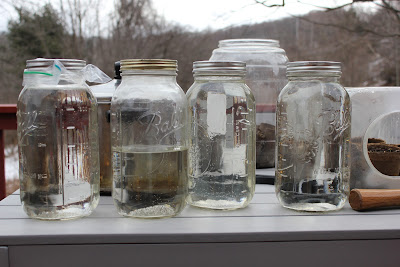 The sugaring process has a bit of a moonshining feel, lots of glass jars filled with clear liquid.... 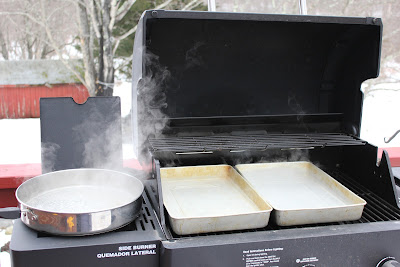 Let me pause here for a moment and share that the boiling down process needs to happen outdoors, as most of the water is boiled out of the sap and evaporates. This puts enough water in the air to remove wallpaper from the kitchen walls, cause cabinet doors to warp and other things that insane amounts of steam will do indoors. Since this is my experimental year (and part of the sugaring culture is to make maple syrup spending as little cash as possible) I used what I had- our grill. Next year, I'd like to upgrade to our fire pit with a metal grate and a large, flat pan. 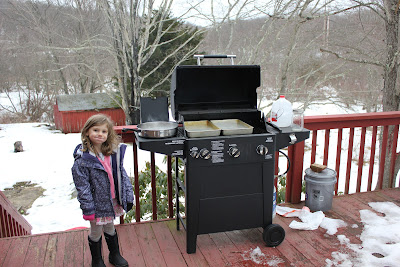 All blogposts need pictures of a cute kid, right?

We boil and boil and boil outside until the sap begins to darken, the steam smelled very sweet and it is a small enough amount to fit into a pot on the kitchen stove. On a small scale (as compared to those with "sugar shacks" in their backyard), the sugaring process is finished indoors so a close eye can be kept on the temperature. 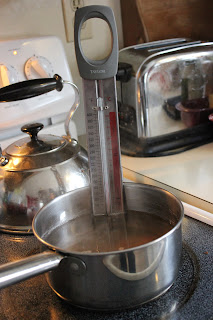 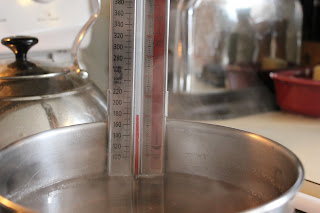 So, the cool science behind sugaring is that the sap becomes syrup when it boils to 7 (or 71/2) degrees above the boiling point of water. For our altitude, water boils at 212, so I had to get the sap to 219; then waaa-laaaa- we have delicious maple syrup! 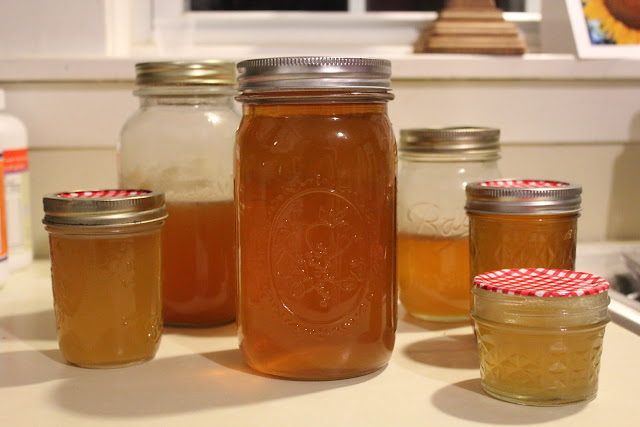 And here it is folks! This is a little sampling of what I made! The center jar is my favorite batch, it is what I consider Grade A, fancy (based on www.ctmaple.org). You can see some variations in color. I think this is due to lack of filtering and/or not boiling to the exact temperature. When I am ready to use or give these away, I can simply open up the sealed jars, filter again and reboil until I get the desired look.

With my four taps, I estimate that I ended with 110 ounces of syrup (a gallon is 128 ounces). I burned one batch and gave away 3 gallons of sap to a friend for experimental purposes. I also lost a good deal of sap on the days when it was running the fastest, as my milk jugs couldn't hold enough before I could collect it.

This has been a really fun hobby to play around with. It has been exciting to yield something from our land and with minimal effort, enjoy it for the next year to come!