There's a first time for everything....

- July 04, 2012
It's the 4th of July. What better way than to celebrate the 4th than with a parade, right? Let's mix the excitement of an Independence Day parade with the uniqueness of this small town in New England and see what happens.
See if you can spot anything out of the ordinary.... 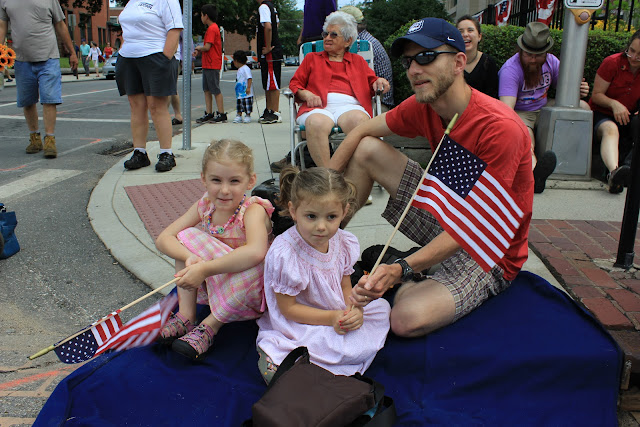 My parade crew is ready for the experience. The ladies behind my family are part of the band. 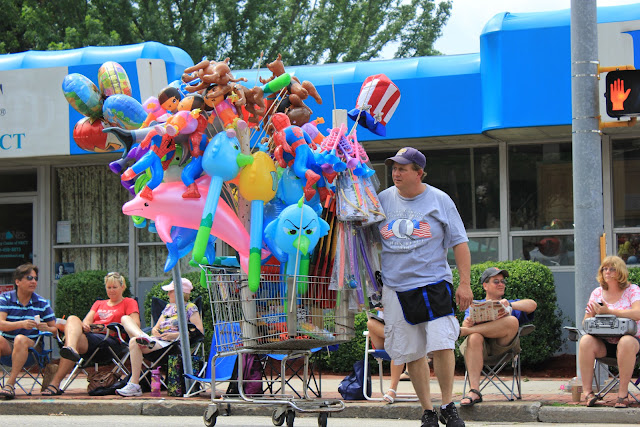 The local balloon people are there. The lady on the right, yep...she's also a part of the band. 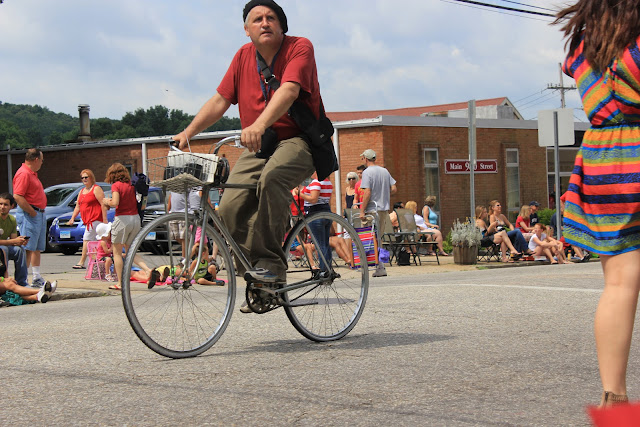 This guy isn't a part of the parade, but at the same time, he is. He is part of the band. 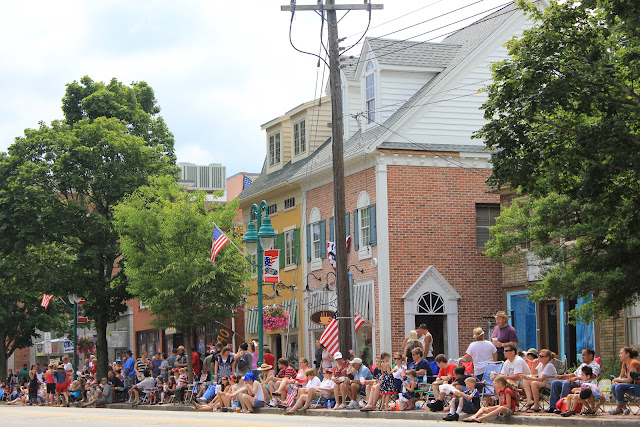 Prior to taking this picture, I'd never noticed how cute some of our Main Street buildings are! Loads of band members here...all ready and waiting for the action to begin. 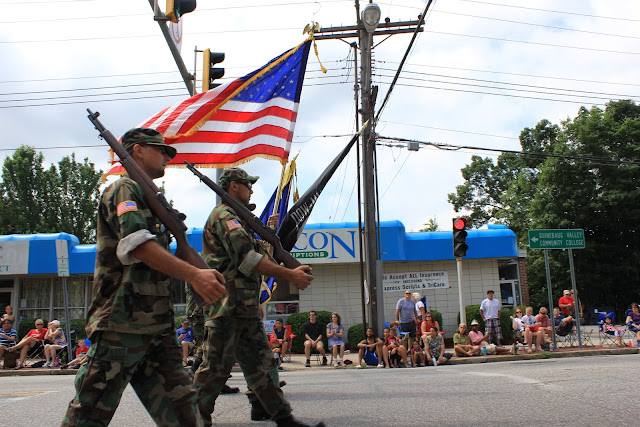 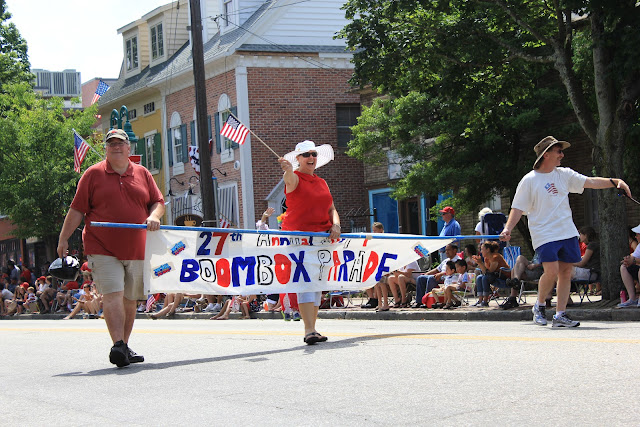 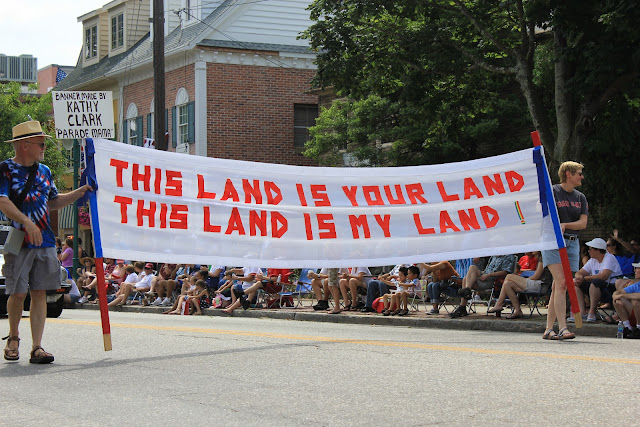 Parade Mama, whomever that may be, made this fun banner. See, the guy in the tie-die? He is a HUGE part of the band. 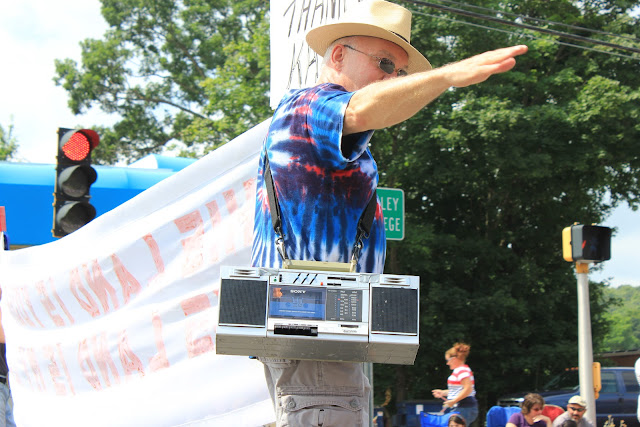 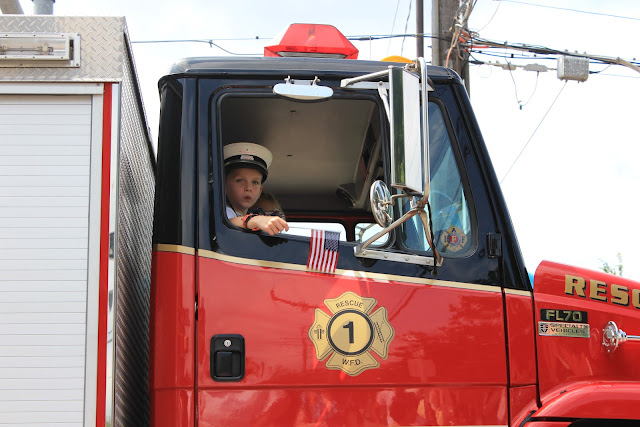 The parade had all the regular participants...the fire trucks. 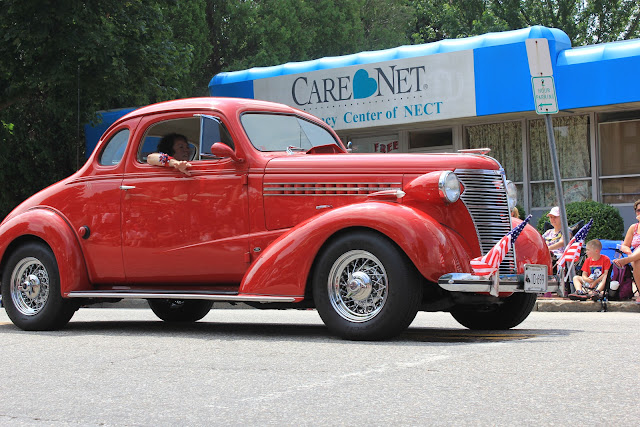 And the old cars. 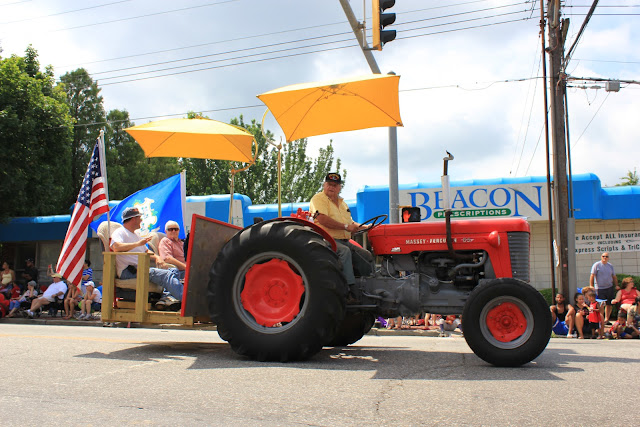 We have tractors going down Main Street here, too! 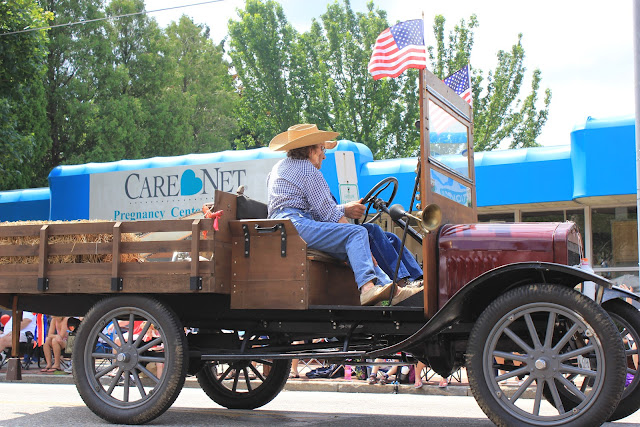 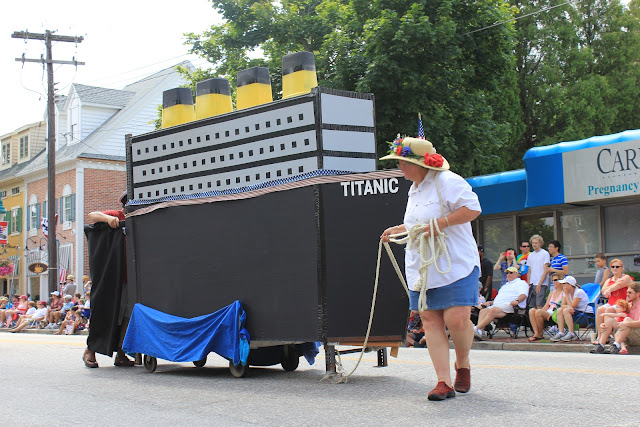 I wonder how frequently the Titanic gets to participate in a 4th of July Parade? 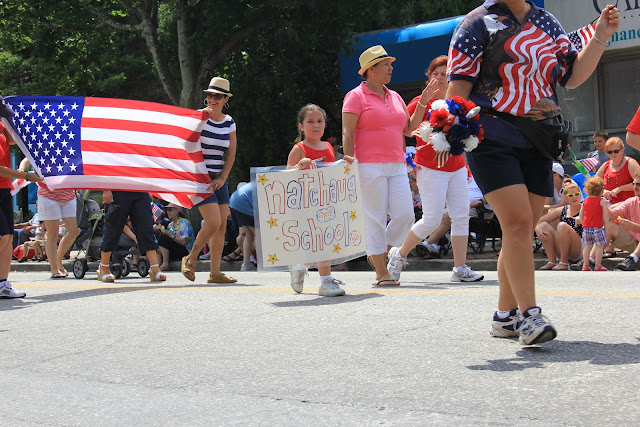 The local schools march along. 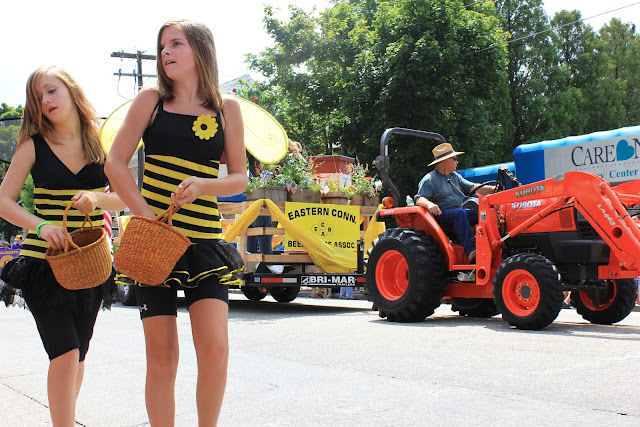 The bee-keepers join. Their cute little bee-keeper girls gave out A Bit-O-Honey candy.... how apropos. 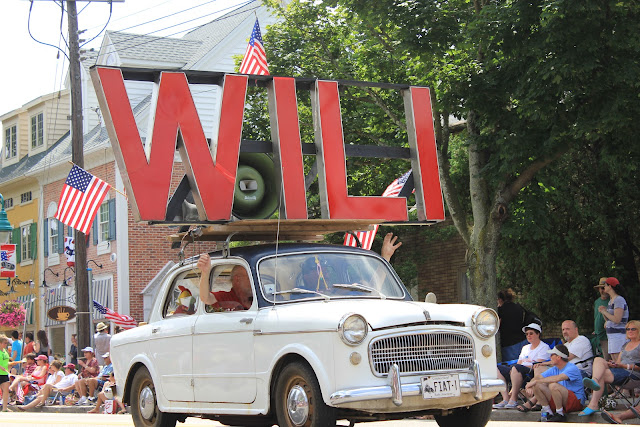 I think this parade participant takes the title of Band Drum Major. WILI is a local radio station. 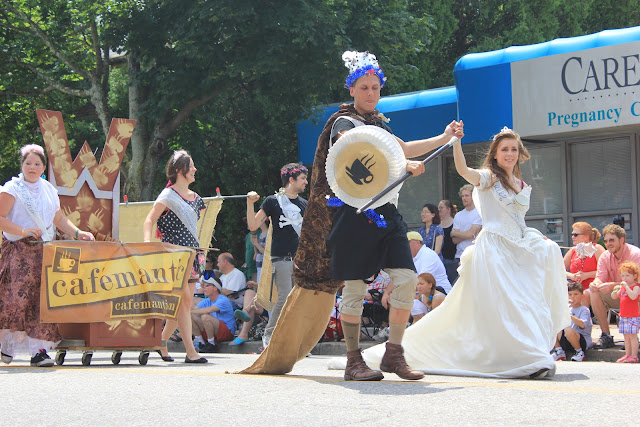 The Queen of Caffeine arrives. No joke. 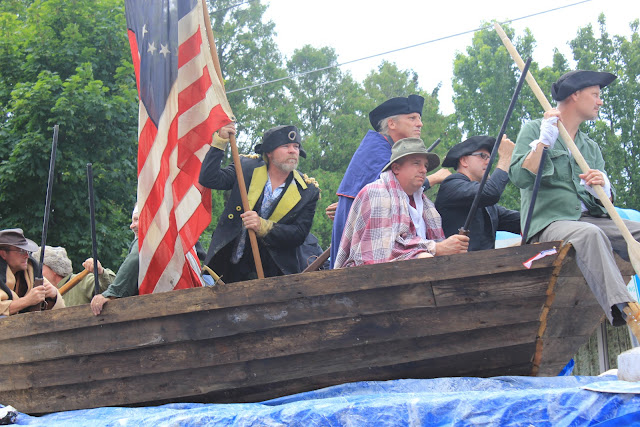 Unsure of these gents' identities, but they are super serious. 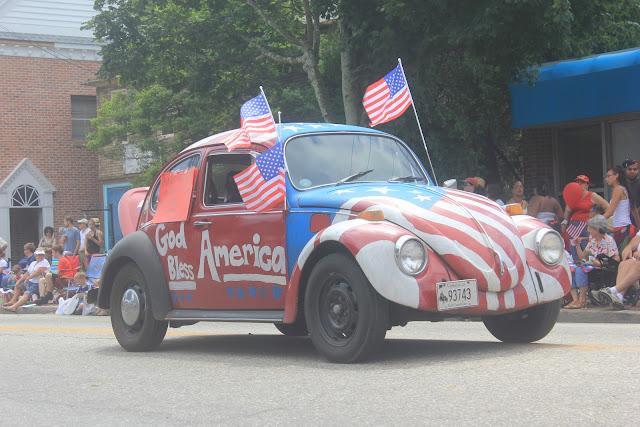 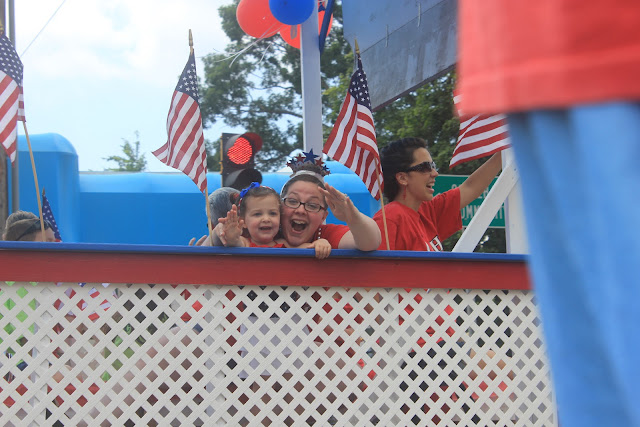 Look! We spotted some friends! 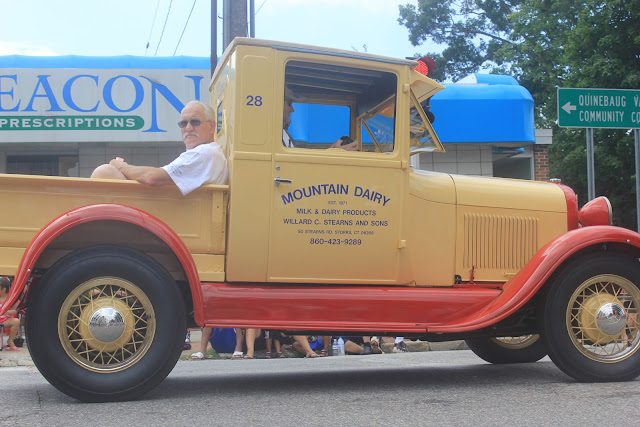 And a local dairy.

No high school marching bands. Not a single drum, trumpet, fife, or cymbal. Only boom boxes. When I first heard about this Boom Box Parade, I wasn't quite sure enough boom boxes remained in working condition to make this happen. But somehow, in this Quiet Corner of Connecticut, enough people dust off their old Sony boom box, crank up their emergency radios or blast their car stereos to make it happen. Everyone becomes a member of the marching band as they tune their radios to the local station and pump out the classic parade melodies.

It was a great way to spend our first Independence Day in Connecticut...and we plan on bringing our own Boom Box next year!